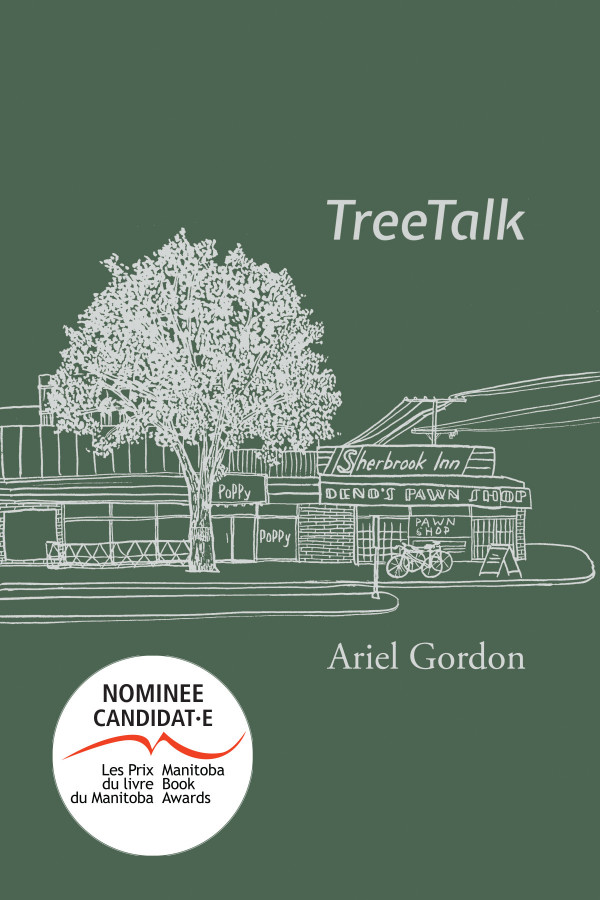 During the heatwave of July 2017, Ariel Gordon spent two days sitting on the patio of downtown Winnipeg’s Tallest Poppy, writing snippets of poems which she hung from the boulevard tree using paper and string. Passersby were invited to TreeTalk too — their secrets / one-liners / meditations / haiku were also hung from the tree. By the end of the weekend, the elm had a second temporary canopy of leaves: 234 poems, 111 written by Gordon, 107 written by passersby, and 16 from other sources.

Gordon has assembled all these voices into a long/found poem that asks: what does it mean to live in the urban forest? What does it mean to be in relationship with each other but also with the more-than-human? The book also includes pen and ink illustrations by Winnipeg artist Natalie Baird.

Since 2017, Gordon has also hung poems in trees at the Sage Hill Poetry Experience in Muenster, SK, the Prairie Gate Literary Festival in Morris, MN, and at the Winnipeg Folk Festival as part of the Prairie Outdoor Exhibition. Stay tuned for more TreeTalk-ing!

“This collection of poems, written during a Synonym Art Consultation residency, is art-making at street level, with eyes on the overstory of an old elm tree in Winnipeg. This is poetry contributing to green with community-driven foliage. And this is how poetry can move, in the wind and rooted, at a time on our planet when trees can use more attending to. That these poems started out as leaves can be felt in the reading. There is a vitality to this work that is verdant. The poems read as if they are still outside, golden-houred. Ariel Gordon has curated a space for herself and for her community in the company of an elm. And we are the fortunate recipients of a collection to share, to read aloud, for the tree of it.”

“Ariel Gordon, truly the Jane Jacobs of trees and poetry, has charmed a multitude of strangers and passersby to sing small songs to the urban canopy, to whisper their secrets and confessions to a neighbourhood elm tree. The result is TreeTalk, a celebration of the city-dweller’s relationship with trees, but also an elegy to the stress and devastation imposed on urban nature in the course of “growing” and developing a city. In TreeTalk, Ariel Gordon not only re-foliates a tree with poems, she adds a startling and crucial layer of leaves to how we might (re)imagine ourselves coexisting with nature.”

TreeTalk’s poems and artwork act like the nearby windows through which readers see people interact with the tree.

The book prompts readers to contemplate the meaning of living in the urban forest and the relationship between human and nature.