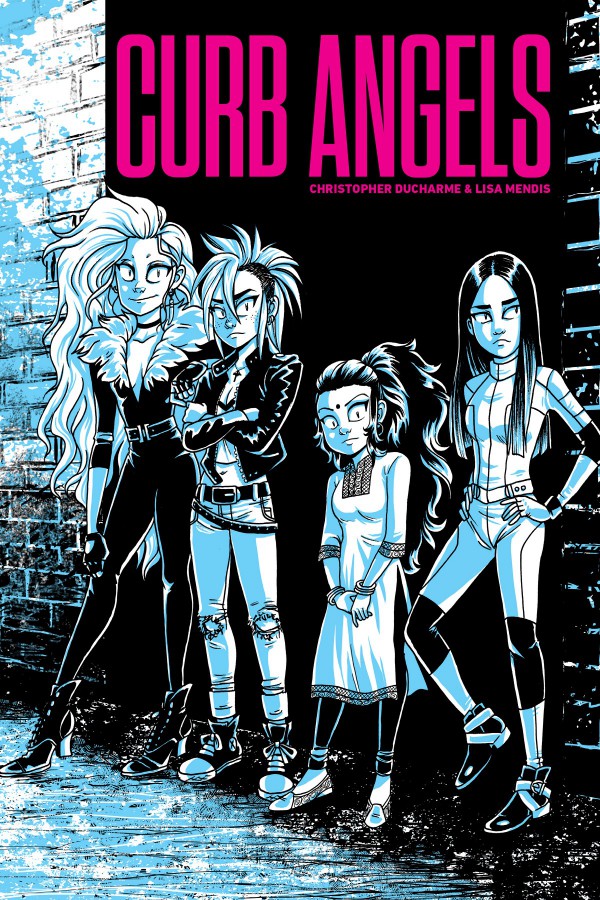 In the post-punk, global economy of the 1980’s, four young women from very different backgrounds are united by a common goal: justice. Curb Angels features fearless female characters on a mission that crosses borders and challenges the status quo. In the face of exploitation and violence against women, they carve their own path and leave a touch of well-deserved wreckage along the way. Powerhouse team Lisa Mendis and Christopher Ducharme join forces in this tour-de-force graphic novel debut to push boundaries and buttons as they explore culturally taboo subjects through sequential art.

“A great read with compelling characters. A page turner I had to see through to the end!”

“Action, intrigue and a boldly unique art style pour out of every single page. With a diverse cast of strong female characters, Curb Angels is a refreshing addition to the graphic novel landscape.”

“With four strong female characters, this is a book to engage female readers of graphic novels.”

An all female vigilante group trying to combat and free human trafficking victims is a cool and fun story that readers can enjoy and cheer on the characters. Dialogues are fun to read, the plot is both horrifying and satisfying and the plot doesn’t go on too long for someone to get bored and struggle to follow along.

The depictions of the female characters are really important. Not only does the book shed light on a serious and really terrible problem, the women protagonists learn to become more confident, overcome personal trauma and what they feel are their weaknesses, and commit to helping other women in a seriously dangerous patriarchal and misogynistic world. And they are depicted in a way that allows them to show their vulnerabilities yet be strong at the same time…to show themselves in a way that allows them to express their sexuality without being victimized by it…and the grave difference between being exploited based on sex/gender, and choosing to be yourself.

The art has a great sense of movement and action and grittiness that mimics the plot. The thick wobbly outlines for the panels, the way the characters and action occasionally rises up and breaks the lines, all give that extra momentum and grit to the story. The color palette goes a long way towards the setting and moodiness as well. Its mood is exceptionally dark for being made up primarily of an electric blue and hot pink. The pathos of the story is also on full display with the emotion in the faces.